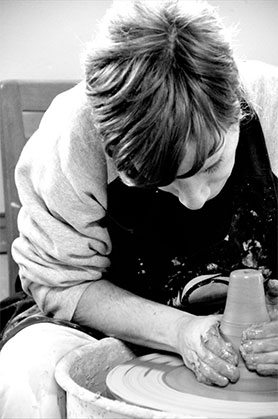 She began her artistic way from the ancient Scuola del Libro in Urbino, that prepared many of the best italian engravers of the 19th Century. Graduated in 1997 at the Public Institute of Art (books’ illustration and engravery), she collected her first important prizes. In 2003 she began her first artistic experience in ceramic.

Polyhedric, self-educated, she attended many shows and prizes, both in Montefeltro and all around Italy. In 2006 she attended a course in Urbania, for professional development in turning-wheel. From then on, her ceramic became a complex world, where she makes interact different moments of technique, history, and expression, throughout a personal research, and experimentation.

The more important artistic value of her ceramic works 2006-2008 is the synthesis between technique and poetical imagination.  Still and sure marks are the origin of “Frammenti di viaggio”.

Her works fix, in the engraved ceramic, her moving throughout Time, her emotional evolution, and define her final landing to the balance of the Being. It’s important to number her many prizes and shows. First Young Prize to Concorso Ceramica Contemporanea Città di Pesaro, promoted by Rotary’s Club and Musei Civici 2007.

Her presence in 47^ Mostra della Ceramica di Castellamonte (TO), her personal exhibition “Inciso”, at Jar Edizioni in Bologna. In autumn 2007 she joined the cycle of contemporary cermet “Preludi e contaminazioni” in Urbania, with her performance “Inciso n.1”, by Castelduranteculturaceramica. From december 2007 to January 2008 she exposed her “Libri d’artista” in a personal exhibition at Jar Edizioni in Bologna (by Massimiliano Cecconi, with an introduction by Elisabetta Bovina). In 2008 she’s part of the 6^ National Show for Ceramists. In 2009 she was involved in “Nuove Argille, the language of the young italian ceramists” at Frac Baronissi Gallery (SA).

6 November 6 December 2015 selected for the “12th Biennial of Ceramics Aveiro” participates with the “Safari” works and “Farm” Portugal. In July 2016 the third prize at the “International Exhibition of contemporary ceramics” Albissola Marina-Savona. August 2016 third prize at the “Competition Sgarzini” “Ceramics yesterday, today and tomorrow” Urbino (PU). Group exhibition touring “CUBE- Compressed”, Faenza Argillà September 2016, Torgiano PG October 2016, Rome in november 2016 and the next in Torino in the year 2017.